A downloadable game for Windows

Currently the game only works over LAN or direct IP over Hamachi/LAN, meaning that both players need to be on the same network.  Port 7777 is needed to play so if you try to just connect over the internet you will need to make sure that port 7777 is open and forwarded.  The game's networking does not work on the Eduroam network or any network that blocks peer to peer discovery.

After getting the game you can simply copy the files to another computer or give them to your friends.

Nova Factor is a 1 versus 1, competitive first person shooter.

A match consists of five total rounds.  The first round of the match only contains the players themselves.  As the players navigate the map, shoot, jump, etc, their movements are recorded.  The second round spawns the players into the map in exactly the same way as the first round.  The addition to round two is a replay team mate that also spawns.  This replay will exactly play out the previous round’s movements until it becomes unshackled.  The unshackling process is activated by three different conditions.

End of Recording - The first condition is that the replay has reached the end of the recording where at that point the AI unshackles and becomes a free-roaming, hunting bot.

Taking Damage - The replay takes damage when it wasn’t supposed to.  After taking damage the AI will become free-roaming and react to the new situation.   A player cannot shoot their own bots to unshackle them immediately.  To avoid this game breaking strategy, friendly fire in the game does not exist.

When a player dies, they have the option of jumping into any unshackled bot, that is still alive, to continue the battle.  The icons located in the upper part of the screen represent the number of rounds that have been played in total, which includes the current round.

The Heads Up Display provides a player the means of keeping track of the round numbers and the current state of both the player’s and enemy’s characters.  These round numbers assist the players in tracking who is still alive in the match and what state that character is in. 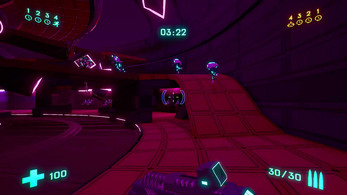 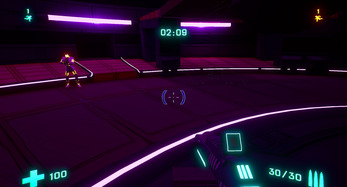